Ukraine’s Greek Catholic Church, Archbishop Svetoslav Shevchuk of Kyiv-Halich is just one of the many Ukrainian church leaders who has called a tougher Western response to the bloody war in their country, as invading Russian forces attack residential areas and prepare for an assault on Kyiv.

“This is not a military operation, but a war, a war first of all against civilians,” said the head of “Ukraine stands and Ukraine fights, and I thank all those worthily exercising state power at various levels and organizing the population’s protection,” he said.

The archbishop issued the appeal as a third round of talks between Russian and Ukrainian delegations took place on Monday, with Moscow continuing demands that Ukraine accepts neutrality and “demilitarisation” while recognizing its forced 2014 annexation of Crimea and independent republics at Donetsk and Luhansk, where more than 14,000 soldiers and civilians have died in eight years of fighting with Russian-backed separatists.

He said “Let us be comforted by the realization that our innocent sufferings will be crowned inevitably with victory and eternal glory, just as the sufferings of Christ were crowned with them. . . With God’s help we will win — and Ukraine, now crucified by the Russian occupiers, will be resurrected.”

The message was one of several issued by the Metropolitan on Sunday, after talks with the Mayor of Kyiv, Vitali Klitschko, and the commander of Ukrainian forces defending the capital.

Meanwhile, the president of Ukraine’s Roman Catholic Bishops Conference, Archbishop Mieczyslaw Mokrzycki of Lviv, said virtually all Catholic priests and nuns had opted to remain in place across Ukraine, adding that he and other bishops had asked the Pope to renew St John Paul II’s symbolic dedication of Ukraine and Russia to the Immaculate Heart of the Virgin Mary, in recognition that “evil continues flowing from Russia and engulfing the Ukrainian lands with a bloody fire”.

The Polish-born archbishop said the “courage and effectiveness” of Ukrainian resistance had “shocked the world”, but also warned that Russia’s negotiating tone suggested there was “no hope of any swift end to the aggression”.

In an emotional address to 25,000 pilgrims in St Peter’s Square, on Sunday, Pope Francis said that “rivers of blood and tears” were now “flowing in Ukraine”, and the need for assistance was “growing dramatically by the hour”. He called for “guaranteed humanitarian corridors” for civilians seeking emergency aid and shelter.

Also view Archbishop Calls for Protection of Christians in India. 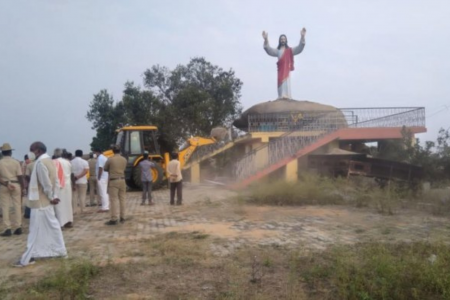 An Indian Catholic archbishop is pleading for the southern provincial government to protect Christians, their places of...

After Friday's attack by Israeli police on the funeral of Palestinian -American journalist Shireen Abu Aqla, the Va...